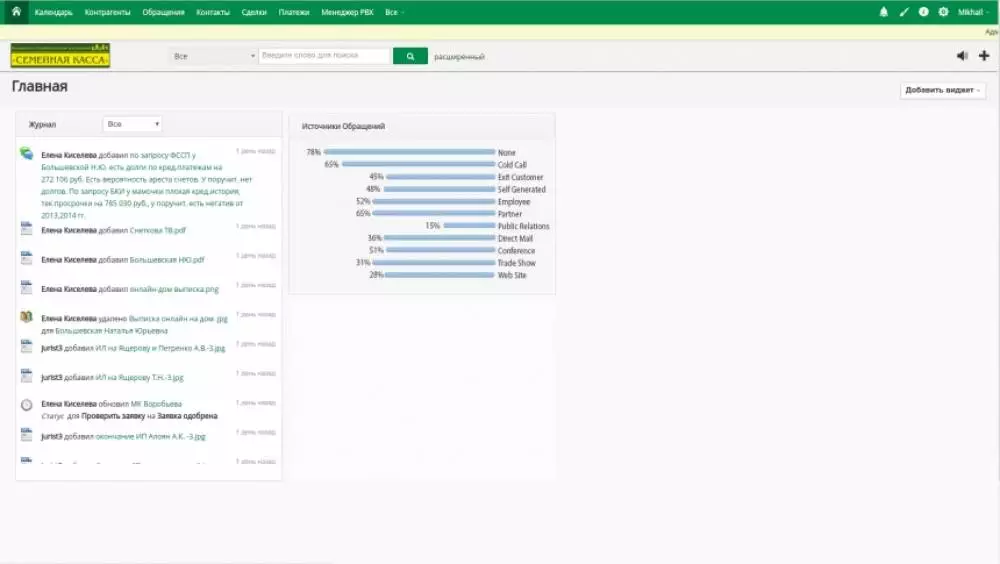 Most organizations have corporate goals and mission. But the Family credit unions has a higher mission.

CU "Family Cash" began its activities in 2007 and attracted more than 3 thousand shareholders, which employs about 10 people.

Despite such rapid growth, the cooperative sought to provide high-quality financial services to its shareholders. A few years ago, however, the credit cooperative began to realize that it became much harder to maintain personalized and effective relationships with shareholders as the membership base expanded. If before the Family Cash Desk was a small organization where workers knew each shareholder by name, now the management began to understand that the cooperative needs centralized technologies that help track and build relationships with members. In this regard, a working group was established, which began to evaluate CRM systems operating on the market.

A separate problem in finding a suitable CRM system was the level of complexity of the relationship that the cooperative periodically faces. Due to its specific nature of work in the banking sector, the KPK Family Cash Desk works with legal entities, and the organizations bring the greatest income to the cooperative. Work is also carried out with individuals and many of them work or are members of an organization. Companies are often interconnected in one way or another. Because of such a complex structure of relations, even the simplest events, for example, congratulations on the New Year holiday, seem an impossible task.

Most of the considered systems allowed us to maintain a client base, but the ability of VtigerCRM to divide individuals and legal entities, as well as to lead and manage relations between counterparties, put this system in the selection at the center. Also, many of the other systems considered were customer-oriented. VtigerCRM made it possible to support the commercial orientation of the credit cooperative along with the complex interpersonal relations between shareholders and legal entities.

Another equally important advantage of the system is its flexibility. The working group noted that despite the fact that CRM does not meet all the needs of the cooperative "out of the box", it can be customized to the requirements of the PDA. As a result, the group stopped on VtigerCRM, prescribed a list of improvements in the technical specifications and set a goal to implement the system in 2013.

FLEXIBLE, BUT NOT STANDARDIZED

Despite the fact that the cooperative noted the flexibility of the system, this aspect was not in itself an advantage. The initial goal of the CRM implementation project was to automate the contact center. And VtigerCRM was customized in such a way that covered a wide range of needs. Over time, however, it became clear that the processes that were configured in the system were not standardized and worked out, and then led to some problems.

By 2015, the “Family Cashier” PDA was at a crossroads. Taking into account further growth and increasing competition, the cooperative needed a centralized data processing of potential shareholders and an automated sales process, while the system required further refinement, and the existing solution did not fully cover PDA business processes. The cooperative also needed a solution that would support the mobile sales office of financial products and payment terminals.

After evaluating the improvements, it was decided that VtigerCRM is still the best solution that would satisfy the needs of the organization. A year before this decision, the Center for Information Technologies has already implemented a project for the implementation of CRM for a microfinance organization, and therefore had the opportunity to connect additional useful modules for the credit cooperative. KPC "Family Cash Desk" decided that the new version of VtigerCRM with additional modules best meets the needs of the organization, at the same time providing opportunities for system refinement due to the open source code and modular structure. A large number of improvements were implemented, additional functionality was introduced that was not included in the boxed version of the product. The revision was carried out according to the technical task, to the needs of the credit cooperative. The Information Technology Center also introduced integrated end-to-end analytics, set up remote access for the mobile office, and integrated with payment terminals.

In 2015, the Family Cash Desk was re-implemented the VtigerCRM. At this time, the working group applied a completely different approach to the implementation of the system. First, before starting the project the team carefully worked through the functionality of the future system, realizing all the benefits that CRM can bring. Secondly, they applied a different approach to customization, demanding a hard justification for the need to modify the system for PDA business processes.

CRM-system allowed to unite managers into one. If before, experts formally divided into two large groups of borrowers and savers, after the introduction of Vtigercrm, they were in the process of joining into a single group.

The first thing the credit cooperative began with was to provide access to the system directly to the shareholders themselves by arranging for them Internet and telephone banking. Thus, shareholders could get answers to their questions, bypassing operators, saving staff time. At the very beginning, when field testing the system, it was possible to reduce the number of calls by 3%, and the staff’s written answers by 44%. Thanks to the automation of the marketing system and the setting of tasks in accordance with business processes, the speed of response to e-mails has accelerated by 3 times. The system allows you to give automatic answers to questions of shareholders by e-mail, through a personal account on the site, by phone. This allowed the release of employees for consulting clients.

The system also made it possible to speed up the coordination of documentation between departments by 5 times. For example, if earlier the process of approving loan applications for the maternity capital program was conducted by e-mail and the legal department was forced to open several different systems in order to coordinate the documentation, now everything was done in one window. Shareholders did not need to wait a whole day to get a decision on the approval of a maternity loan. Everything happened within 2-3 hours.

In the same way, maximum automation was achieved in business processes for issuing consumer loans. If earlier credit specialists were forced to manually carry out checks at the credit bureaus, FSSP, the Ministry of Internal Affairs, on the debt check website, now the system does all the work automatically.

The heart of all this, of course, was the information about the shareholders, as well as the history of interaction with them contained in the card and obtained from various systems, while all information can be obtained quick and easy access. Employees did not need to open several applications to assemble a comprehensive picture of the shareholder. Everything is stored in one place.

The availability of all information about the shareholder may be very simple functionality, but it should not be underestimated. So, once the chairman of the CCP board, visiting one of the large enterprises, during the negotiations, used the wrong information, including analytical information, which put the cooperative’s reputation at risk. Today, having at hand all the data on shareholders, you can quickly make the right decision.

Storing all information about shareholders in a single database allows the management to obtain comprehensive analytical information about the credit cooperative. Thus, the Information Technology Center has designed the following types of reports for the CPC: the number of potential shareholder requests for the period, correlation and regression analysis, share segmentation, ABC & XYZ analysis.

I set up a daily import of contracts and payments from the accounting system, which allowed managers to receive reliable and timely information. In addition to this, employees have the ability to track external and internal data on shareholders to measure the share of a PDA in their wallet.

KPK "Family Cash" plans in the future to expand the functionality of CRM, introducing the system in the legal department, accounting, in the collection service. The credit cooperative has already implemented the process of nurturing leads in CRM and plans to expand the system from the marketing department to other services. Ultimately, the goal of the cooperative is to get all the benefits of CRM, better analyze the shareholders and segment the base to provide personalized marketing messages and implement the cross-sales strategy.

I will make time for your project. Knowledge of Vtiger CRM, SuiteCRM, Laravel, and Vue.js. I offer cooperation options that will help you take advantage of external experience, optimize costs and reduce risks. Full transparency of all stages of work and accounting for time costs. Pay only development working hours after accepting the task. Accept PayPal and Payoneer payment systems. How to hire professional developer? Just fill in the form